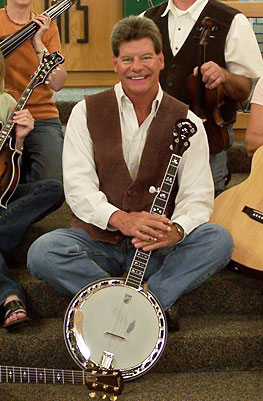 Brad Miller bought his first banjo when he was nineteen years old. Having just learned the guitar, he happened to see the movie “Bonnie and Clyde” and thought the coolest thing about the movie was the sound track, with the get-a-way scenes put to the classic Foggy Mountain Breakdown from Flatt and Scruggs. He ran right out and bought a cheap banjo and started teaching himself how to play.

He learned the basics and incorporated some bluegrass and folk arrangements into his first acoustic group named “Head and Ex”. This duo included his twin brother Bruce (now a famed wildlife artist) and they played around campus at St. Cloud State University in the ‘70’s.

Soon a third player joined them. Terry Hirschi was a good friend and an excellent guitar player and vocalist. The three formed “The Trim Trio” and played at the old Grand Mantle Hotel in downtown St. Cloud for several years during the early 1970’s.

Pike played wedding receptions and special events throughout the “80’s” and finally disbanded in the early ‘90’s. They all remain good friends to this day, having shared a special part of their lives together. Performing in a band can coalesce or divide people. In PIKE’s case, it was all fun, all the time! They still get together and play for fun, dredging up their repertoire of the Eagles, Marshall Tucker, 50’s and 60’s greats and others.

In the late ‘80’s, he turned to learn the saxophone. His deep love of jazz fueled this undertaking and, for the first time in his life, he took music lessons. He became good enough with a tenor to play back-up on many songs and lead on songs like “Tequila” and others.

Brad plays the following instruments in order of proficiency:

In the last ten years he’s focused his musical attention to bluegrass and devoted nearly all his musical learning and exploration to this genre. He loves the simple melodies and stories told by Americans that hold the same truths today as generations gone by. He especially moved by the classic American music of Henry Foster.

Brad moved from Minnetonka to Crosby, MN in 2003 with his wife Lisa and daughter Sienna. They love the up-north lifestyle and the community. He’s an avid outdoorsman spending most of his spare time fishing on the many nearby lakes and rivers. He operates a website design and marketing service in Crosby called BAMsites and built this website.